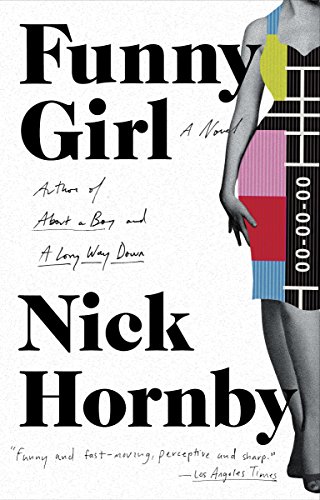 I have read all of Nick Hornby’s books even the music essay ones and somehow it took me until now to read Funny Girl. I guess my library hiatus had more casualties than I thought. I enjoyed the beginning of the book. Barbara from Blackpool goes from being Miss Blackpool for an hour to moving to London, re-inventing herself as Sophie and through a lucky break–she is really funny at an audition of a not-so-funny television pilot–becomes the star of a hit TV sitcom about a married couple. The set up of the show is Northern England girl meets Londoner and hirarlousness insues. Lucklily, I’ve read enough British books and watched enough British TV to get why this would be funny. The book cycles through the perspective of the producer, the writing team, Sophie, her co-star and on-again-off-again lover Cliff. It started off strong, it was a cute premise and you got to know the characters fairly well. By halfway through though, the story seemed to stall. The writers had a hard time coming up with storylines about halfway through the second season (about episode 22 of the series) which I thought was funny and very British–here that would barely be one season of a network show! Sophie gets a better apartment and stars in a B-movie but we not only have any real sense of what she is thinking and how she is spending her time. We get more into the writer’s lives (one is gay and in fear of being arrested, one is more ambivalent sexually and married with a baby) and their day to day lives but we lose track of what the “funny girl” is doing. The show ends after four seasons and then the book really speeds up and next thing we know, the cast is in their 60s/70s and looking back. It was weird and abrupt.

The book wasn’t bad exactly but it started out like a regular book then sped along to the point where it almost seemed more like an outline than a novel. I’m not sorry I read it, it did give me a neat glimpse into 1960s London (even if it was a little wink wink nudge nudgey with the name dropping–Jimmy Page did the theme music??) but it could have been so much better.