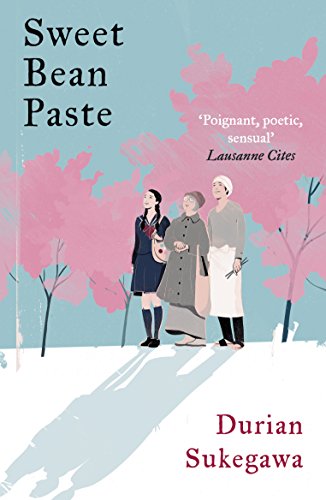 I’ve read a few books the last couple of days but Sweet Bean Paste by Durian Sukegawa was my favorite. Translated from Japanese, it is the story of a reluctant dorayaki (a type of pancake filled with sweet bean paste) chef who against his initial impulse hires a woman in her mid-70s to help out at the dorayaki stand. She wins him over by making very, very good red bean paste that is vastly superior to the bean paste-in-a-can he had been using. It is a very slow method that she teaches him; they arrive before dawn and it just read in time for the 11 AM opening. Soon he gets a following at the stand beyond the usual school girls after they try the dorayaki made with the new paste. One quiet teenage girl strikes up a friendship with the man and the old lady.

Trouble comes when it is revealed that the old lady, who had been making bean paste for 50 years, lives in a sanitarium for lepers. She had contracted Hanson’s Disease (leprosy) as a teenager and was cured though it left her hands gnarled. The owner of the shop wants her gone from the kitchen and certainly not personally greeting customers. He ignores this and she keeps working. One day he is hungover and tells her to make the paste and save it for the next day. When he comes in the next day, she is making the paste again because she just couldn’t turn away the customers who showed up while he was out, even making the pancakes which was always his job.

Word gets out about where she lives and she leaves the shop. She writes to him and he and the girl go to visit her in the sanitarium. She tells them a lot of about her life.

The book was really interesting to me as it combined two of my favorite topics: food and infectious disease.  It was written in a very lyrical way and even though it ends on a bit of a sad note, there is hope of a happier ending ahead. It was great peeking into not only the food culture of Japan but something that is rarely talked about: the mistreatment of those with leprosy in Japan. It wasn’t until 1996 that even the cured residents of the sanitariums were allowed to leave the grounds. Many had lived there since childhood and the conditions were rather grim. Some, like the old lady, formed clubs to make the goods and foods that they could not purchase because they were not allowed outside. They were also not allowed to have children although they were allowed to marry fellow residents.

Also: there is a movie out based on the book called Sweet Bean that is available for purchase on Amazon and is also streaming on Netflix. We watched it this morning and it was very good! It was wonderful seeing how they made the bean paste and the acting was excellent.