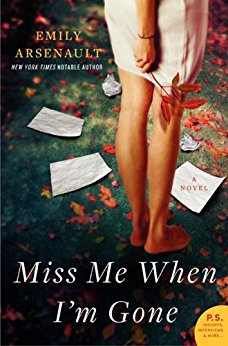 This book was an unexpected delight. I didn’t remember what it was about at all or what it was about but it was on my Amazon wishlist (I’ve since made a dedicated book wish list, why did that take so long?) so I requested it and it was finally available to download to my Kindle. Miss Me When I’m Gone is the story of a very pregnant woman (Jamie)  in her mid-thirties with a saintly husband, who finds out that her slightly estranged, college best friend (Gretchen) is found dead after a reading of her memoir at a public library.  Her friend had written a part travelogue-part memoir where her personal thoughts about the end of her marriage and life were examined through the len of country songs sung by women. Jamie is made literary executor of Gretchen’s next memoir which was to be basically the same thing but about country songs sung by men. As Jamie goes through Gretchen’s notes it seems like the book morphed into an exploration of her birth mother’s life and murder (she had been brought up by her bio mother’s older sister) and a search for her birth father.

The book was very readable and even a bit surprising. It is half from the viewpoint of Jamie investigating Gretchen’s death, which turns out to have not been an accident, and half from excerpts of Gretchen’s published and unpublished memoirs. It wasn’t quite a straight mystery but it was definitely “literary fiction” with a serious mystery bent. Eventually, we find out who killed Gretchen and her mother (which was a bit tidy but until towards the end I didn’t guess who did it which is rare) and learn quite a bit about country music and publishing along the way.

A great book for anyone who likes a lighter mystery without a big gimmick or silliness. It was basically your normal literary or “women’s fiction” about a woman wondering how much she really knew about her best friend (or other friends and acquaintances) with a mysterious death mixed in. I look forward to checking out her other books.

One thought on “Miss Me When I’m Gone: A Novel by Emily Arsenault”