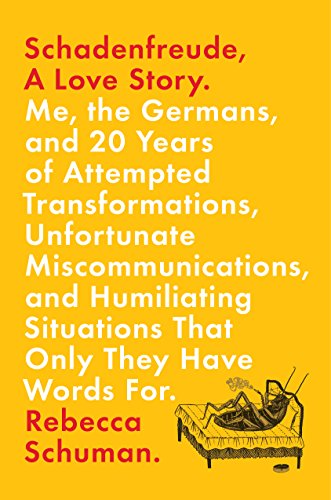 Schadenfreude almost made me want to go to Germany. Rebecca Shuman did a great job of weaving in her personal story (she basically became a German major–without knowing German!–because she had a crush on a boy in high school who introduced her to Kafka), the sites and sounds of Germany and Prague, and the struggles of making it in academia.

She is just a few years older than I am (by my rough calculations) so a lot of her high school and college stories were familiar to me; I knew boys with that awful bowl cut and remember all the corduroy! She did a great job of capturing the emotions of that age which I find is rare in a lot of memoirs. She was also very honest about her first trip to Germany where she did not get along with her host family–she felt like they expected her to be a peppy cheerleader while she was decidedly more mid-90s grunge–but admits that some of the fault was hers. She was pretending to know more German than she did and as a result did things like make expensive local calls and use up the pricey hot water with daily hot showers that could have been avoided had she better understood what her host family was telling her. She was also vegetarian and I have to say, Germany seems like the worse country ever to be a vegetarian in. She eats a lot of potatoes and rolls throughout her trips and seemingly little else besides tons of beer. When she goes back to Germany later we get an interesting look at the era after the wall came down but before Berlin was transforming into a more modern German city. Lots of detail about the punk scene, the people and neighborhoods which I found interesting.

After college, she bounces around a bit, meets her husband and eventually goes for her PhD. Then we learn a lot of the struggles of academia, the poor pay of adjuncts, living in dorms when nearly 30, having to move to whatever college will take you after graduation. Eventually, she becomes a writer and a mother.

In short, it was a funny, well-paced, interesting story of a quirky woman and her love-hate relationship with German. One of my favorite memoirs in recent memory.

2 thoughts on “Schadenfreude, A Love Story: Me, the Germans, and 20 Years of Attempted Transformations, Unfortunate Miscommunications, and Humiliating Situations That Only They Have Words For by Rebecca Schuman”