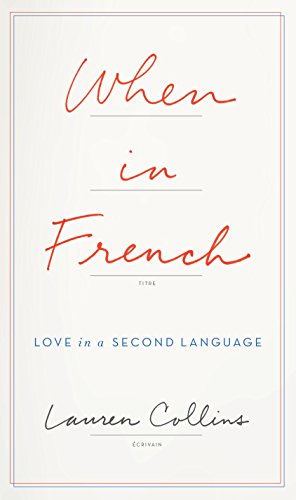 Perhaps it was a mistake reading this right after Schadenfreude which I enjoyed so much. I had both out of the library and they seemed like a natural pair: both were written by American women writers who lived abroad in a country where English was not a first language. I was wrong.

When in French is well researched and well written but I didn’t enjoy it half as much. It was billed as a memoir of a woman who married a Frenchman without knowing the language and their adventures in Europe, namely London and Geneva. In actuality, it was half memoir, half very detailed study of linguistics. I would not have minded it so much if she had stuck to short paragraph at the beginning of each chapter (similar to Schadenfreude ,  which started each chapter off with a new German word and definition) but these lessons on language seemed shoehorned into the memoir’s narrative. They occasionally were related tangentially but often it seemed like she was really stretching to make them fit. She would have been better off writing either a memoir, an academic work about language or even both just not jamming them together in the same book.

I like language and the parts were interesting but seriously disruptive to the flow of her personal story. I found myself skimming them to find out what was going to happen next with her relationship with her French husband.

She was an interesting person too, very bright yet she never took any interest in learning French until she absolutely had to when she was basically stranded in Geneva unable to communicate due to her husband’s long work hours despite her husband being French. Granted, they lived in England when they met but still! You’d think you’d try to learn something! It was interesting to see how, after learning French, she realized some things about her marriage. For example, when they were dating she told someone they loved them in an enthusiastic way, meaning that they were great, and he was quite upset. She chalked it up to jealousy but she realized years later that it was because in France and in French, you only “love” your partner not random people or a slice of avocado toast. Another was the American expectation of your partner being your best friend and wanting to do everything with you while the French tendency is to be more independent.

I did find the book enjoyable but it was so choppy I couldn’t rate it much higher. I felt like she left out a lot of details about their life in order to fit in all the academic linguistic/history of language stuff which was a shame but that is much more interesting to the casual reader.

One thought on “When in French : Love in a Second Language by Lauren Collins”